Home Cucina Storia del Cibo There’s a smell of frappe and castagnole in the air! 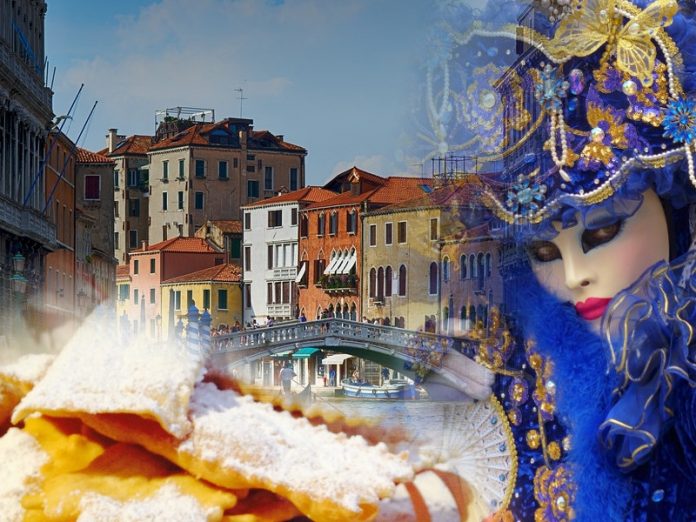 We’ve only recently put our Christmas trees away, finished up the last leftovers of our Christmas and New Year meals, and already everyone in Italy is preparing for Carnevale frappe e castagnole.

It is the liveliest holiday of the year, and dates back to the ancient Greeks and Romans. It is celebrated in many parts of the world with costumes, parades, masquerade balls and delicious desserts, before beginning the period of fasting and abstinence, for the Cristian religions.

Some of the most famous Carnevale in the world are Italian, such as the one in Venice, which has been held since the 11th century.

Thousands of venetian citizens and tourists roam through this magical city’s famous canals and narrow streets wearing masks and costumes, posing for photos and dancing.

Shops rent or sell everything that is needed to participate in the merrymaking.

The elaborate costumes represent ancient history, the Renaissance or 18th century Venice, and the city hosts fancy dinners, parades, masked balls, concerts and a contest where the most beautiful costume is chosen by a panel of international costume and fashion designer judges.

Other well-known Carnevale are the ones in Viareggio, with its famous floats with papier maché characters, and in Cento, which dates back to the 17th century.

The most popular are the frappe, deep fried, light pastries made with flour, butter and sugar that look like little, honey-coloured, puffy biscuits. They are very light, have a crumbly texture of puff pastry and are served with a sprinkling of sugar on top.

The other popular sweet is called castagnole, and these are made with eggs, sugar, flour and butter, are shaped like little golf balls, either baked or deep fried, sprinkled with sugar and can be filled with chocolate or custard cream.

The tradition of making frappe in Italy dates back to the ancient Romans and was originally called frictilia, a dessert fried in lard prepared during the celebrations in honour of the gods of fertility.

Today they are known all over the Italian peninsula with different names and different shapes, but whether they are called “bugie” in Piemonte, “cenci” in Tuscany, “chiacchere” in the south, “frappe” in Lazio, or even “salta-sù”, “stracci”, “pampuglie”, “frittole” o “manzole” in other regions, covered in honey, chocolate or powdered sugar, the fact is, they are irresistible!

There are many different recipes for castagnole too, with chocolate, ricotta cheese, cream, or jam, and either sprinkled with powdered sugar or honey, in some areas people also add rum, alchermes or anise seed liquor.

Recipes for castagnole were first found in the state archives of the town of Viterbo, in a manuscript that dates back to the 1700s.

At Carnevale time, it’s so pleasant to smell the aroma of these typical treats everywhere you go, while it lingers in the air outside homes, bakeries and pastry shops.

Here are our recipes for these simple and delicious cakes, to prepare at home.

Ingredients for the frappe

Ingredients for the castagnole

Prepare all the necessary utensils, especially the pastry cutter wheel for the frappe and the disposable pastry bag which is essential for the castagnole.

To make the frappe, follow the same procedure for the shortcrust pastry, so once the flour is sifted, add the other ingredients. Once the dough is ready, let it sit in the refrigerator for half an hour.

The castagnole are simple to make and the mix is similar to the bundt cake recipe. Beat the eggs with the sugar, then add the softened butter, the grated lemon peel, the milk, the limoncello, the baking powder and the flour. Pour about two litres of vegetable oil in a high-rimmed pot, and put it on a low flame to heat.

In the meanwhile, fill the pastry bag with the castagnole mix. The oil needs to be just right, medium temperature, so as to allow for the castagnole to cook also on the inside.

Slowly push the dough from the pastry bag into the oil with the left hand, cutting the dough as it comes out with the right hand using a sharp knife, in order to create perfectly round castagnole once they fall into the oil. If one doesn’t have a pastry bag, two teaspoons can be used, but the result won’t be as perfect.

The portions must be put in the oil and taken out together, never add more raw mix with the one that is already frying otherwise it modifies the temperature of the oil and the results won’t be as good.

Take the fried castagnole out of the oil, place them on paper towels to absorb the excess oil, allow them to cool, put them on a tray and sprinkle with sugar or vanilla-flavoured powdered sugar.

At this point the dough for the frappe is ready. Take a small piece and spread it out by hand on a work table sprinkled with flour. A dough sheeter can be used, as long as the final result is an almost see-through pastry. With the pastry cutter wheel, cut 10×15 cm large rectangles, make two horizontal cuts down the middle and fry them two at a time on a lively flame, then place them on paper towels to absorb the oil, and when cool off, sprinkle with vanilla-flavoured powdered sugar.