Welcome to our usual appointment with our culinary stories.

Our story about this ancient and truly important food, bread, continues.

As we said in our previous article, the ancient Romans were very skilled at making bread, but unfortunately this mastery got lost during the numerous barbarian invasions, up until the Middle ages, a time in which the only bakeries of any importance were found in monasteries. As we can read in historical documentation, there were rules regarding the supply and milling of wheat, the management of water mills and the sale of bread, with excise duty and taxes decided by the governors of the cities and states, as far back as the 1200s.

These increased more and more, reaching a peak in the 1600s.  Besides the weight of having to pay these taxes in order to put bread on their tables, the people had to suffer the injustice of seeing that there were a vast number of privileged people who were exempt from payment:  the clergy, employees of the mint, presidents and counsellors of the state, various private families, and so on.

Various types of bread began to be produced during the Renaissance, according to the people’s social status.

In Italy, in the 1600s, poverty was rampant and there was shortage of food.  The poor were able to make a dark bread by mixing bran, rye, millet and other seeds, those instead who could afford it, added some olive oil and spices to flavour their bread.

The importance of bread is also depicted in art, and we see this when we look at the frescoes, the paintings, the bas-relief and the objects created over the centuries.

Bread is often represented as the protagonist and the various phases of its production and family life is shown.

We can admire scenes of sowing, reaping, milling, creation and baking of bread, as well as its sampling.  With the printing press, various publications that spoke about this food and its economic and social importance were made available to people.

During the times of natural calamities, floods and droughts destroyed the harvests and brought famine.

In Italy, towards the end of the 1800s, in a time of general crisis, small associations of mutual aid were founded by labourers, craftsmen and small wealthy families, in order to help those in need providing them with bread.

A long period of shortage of food was during the first world war and again during the second war, times in which flour was rationed and families were given a card to obtain their ration. How many Italians have a parent or grandparent who can tell them touching stories of how the children were so hungry at that time that they cried for their next ration of bread? Today, instead, we have so many different types of bread from which to choose, with the most imaginative names, with different ingredients, and so much of it is wasted… it gets snubbed or even feared as an enemy of one’s diet.

Bread, however, has always been and will always be a fundamental element of man’s daily diet… we just need to learn what type is best for our health, our taste buds, and overall wellbeing, and which one nourishes us without adding excess weight to our bodies.

According to recent statistics, in Italy each person consumes about one and a half kilos of bread per week. We don’t really know how much we eat in a week, but one thing is sure, we love our homemade bread… we don’t use refined flours, and we make it with natural yeast, spring water and so much love!

We begin by diluting the yeast in the water, then we sift the flours into a large bowl.

We mix them well, pour in the diluted yeast, begin to knead, then we add the sugar.

When everything has amalgamated well, we add the salt and knead the dough until it becomes smooth and no longer sticky. We let it sit for about 15 minutes, then we fold it on itself three times and repeat this process three more times at half hour intervals.

We then place our dough in a bowl, cover it with plastic wrap and place it in the fridge overnight. The following day we take it out, we let it sit at room temperature for about one hour, then we shape it as we wish, we make loaves.

Bread, the poor thing!… loved, hated, mistreated, adored, craved, but no matter what, it will always be man’s faithful companion for years to come. 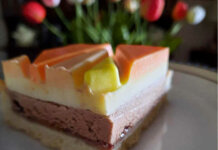